Jasper Michael Ríchez, better known as Jasper Randall (born August 18, 1969) is a musician and actor. He is a member of the Feline5, usually providing the backup vocals; he alternated with Randall Patterson for lead vocals in some songs in 1997 and 1999. Randall, whose natural hair color was red, is known for the wacky hairstyle he wore from 1993 to 2003.

Randall was born on August 18, 1969, to Wilma Randall and Stephen Hickels Ríchez (who goes by Stephen Hickels Randall). He is a member of the Ríchez family, a family of singers that also includes rock singers William and Trent Ríchez (the two of whom are known as the Ríchez Brothers). The Ríchez Brothers are Randall's uncles. Randall began playing the guitar at age seven, and singing along to the Ríchez Brothers' songs. At thirteen, he was performing in front of family and friends. After his high school graduation, Randall sang songs for his former classmates, who suggested he pursue a career in music.

After graduation, Randall dropped the "Ríchez" surname and began using the surname "Randall", taking after his father, who used the surname because it was the first name of his best friend in high school. As "Jasper Randall", he hoped to pursue a successful career in music without being known as a relative to the Ríchez Brothers. He met Randall Patterson in 1987, and both began performing music as a duo. Two years later, the duo met three others who were pursuing music careers.

Randall, Patterson, and aspiring musicians Dan Knox, Ron Oard, and Randolph Orange came together in 1989 to form the Southern Five Group. As a member of the group, Randall decided to do the backup vocals. Like the other members of the group, Randall had long hair during his early career, and, in 1989, the five musicians decided to make their long hair one of their trademarks. It was Randall who suggested that the members cut their hair in 1993, and so began the Feline5's days of donning shorter hair, as well as the days of Randall's famous wacky red hair. The wacky hair not only won Randall more fame, but it won the group more fame. The blue-eyed Randall famously wore the hairstyle until 2003.

In 2003, Randall decided that the "wacky red hair thing" was getting old. He decided to change his hairstyle and hair color. In early 2003, he dyed his hair white (because Patterson had white hair) and began sporting a different hairstyle, which newspapers and other media thought would doom the Feline5. In an interview, Randall stated that his fellow group members received mail from the fans asking what happened to the redhead with the wacky hair. He told interviewers he had to explain that he was that redhead, and he had to tell them why he changed up his look; he changed his look again in 2013, when he dyed his hair brown. After the interview, he planned to leave the Feline5 to start a solo career because he feared the group would fire him anyway. After a week of being flooded with fan mail and receiving pleas from the other four group members, Randall decided not to leave the group.

In 2006, Randall and the other Feline5 group members guest starred in the sitcom The Jordsons. In late 2008, he and the other members starred in a film in which they played a fictitious band that lets success go to their heads.

Randall's look changed again in 2008, but "not as much as last time". He cut off a little more of his hair, but kept his hair white.

In March 2009, rumors started circulating about Randall leaving the Feline5 "for real" in 2010. One newspaper "stretched the truth" by saying that Randall told his fans that he was going to leave the group in February 2010 to begin a solo career. Randall ended the rumor by telling interviewers that he has no plans of leaving, that "if we're still around when we're 85, I'll still be with the group." 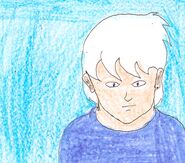 Jasper Randall in August 2009
Add a photo to this gallery
Retrieved from "https://imagine.fandom.com/wiki/Jasper_Randall?oldid=32543"
Community content is available under CC-BY-SA unless otherwise noted.