Kessenna was born on May 29, 1971, to Stella Kessenna (nee Wecklenstaff) and Joshua Kessenna. He was a fan of the Richez Brothers as a child. He played football and baseball in high school. He graduated from high school in the late 1980s and thought about attending college, but in 1990, he decided to be an actor.

Kessenna made his acting debut in 1990, when he was cast in a low-budget film. Soon, he caught the attention of director Keith Sorpels, who cast him in the film Highway to Spickle. Kessenna played Blake Geasler in the film. Kessenna then went on to play a professional baseball player in 1992's John Foorstone. Kessenna went on to star in the TV series Jord, Thomas, & Hyll, in which he starred from 1994 to 2001. He played Simon Greenlee on the show. While the series was running, Kessenna also starred in three films. Those films are Great N' Proud (1995), That's Frouth (1996), and Done Working with Them (1997).

In 2001, Jord, Thomas, & Hyll ended, and Kessenna went looking for another project. In 2002, he was considered for a supporting role in the film Governor of Mylo, but he turned it down, saying that he did not star in films about politics. In 2003, he was cast in the film Jord Stone: Tall Order, which also starred John Carrita and David Monzer. In 2004, Kessenna made a guest appearance in the Peter Swayde sitcom Hangin' Out with Petey. In 2005, he was cast to star in the Harry Joe Morris biopic HJM: About the Man, in which he played Shaggai Duart. He went on to have appearances in films such as War in Yatesburgh (2007), Finding the Way Out (2008), and Sizzlin' Sacal (2009). He has stated plans to appear in the upcoming film Highway to Spickle III: Quest to Be Famous, reprising his role from the first Highway to Spickle film.

Kessenna is married to actress Julia Forran-Hill. They have two children, Edith and James. He is a nonsmoker and also does not drink any alcohol; the reason for this, he said in an interview in 2008, is that his uncle died from smoking and drinking. 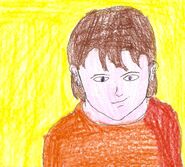 Add a photo to this gallery
Retrieved from "https://imagine.fandom.com/wiki/Kyle_Kessenna?oldid=32368"
Community content is available under CC-BY-SA unless otherwise noted.