Peter Donovan Swayde (born December 29, 1984) is an American-born actor best known for his role as Daniel Marraux in the 2003 film Microton I and the 2008 film Microton II. He starred in the sitcom The Jordsons from 2004 to 2009, and is filming the film Microton III, which will be completed in fall of 2010.

The black-haired, blue-eyed Swayde was born in the U.S. state of Oregon. He showed no interest in acting until he was four years old. As a child, he liked to hang out with his cousin, Johnathan Martin Swayde, who would later become singer Johnny Almina. At age thirteen, he had a major role in a school play, and some of his teachers told him he would be a good actor. He was a fan of the sitcom Westfield Patrol, not knowing that he would later play son to the show's star Anthony Broward.

Swayde made his big-screen debut in 2003 in the film Microton I as Daniel Marraux. Filmmakers offered to hire Swayde look-alike Gary O'Grainour to be Swayde's stunt double, but Swayde wanted to do his own stunts. Swayde played the protagonist, and Ryan Ulysses Pasthodas played the antagonist. Swayde's performance as Daniel was, according to Microton film series director Jonathan Alin, the best performance he has ever seen in his twenty-seven years of directing. Swayde used the fame he gained from Microton I to move on to other films and to television.

In late 2003, Swayde got his own television show, called Hangin' Out with Petey, which only lasted one season. He starred alongside J. J. Bittegau, Thomas Artakle, and Ron Mulanco. Swayde played Petey Nichols, the main character, and spoke the first lines of all thirty episodes of the show. He said in a 2005 interview that every morning, he'd arrive at work early and just have fun with the co-stars, playing games and talking about things that happened the previous day. When the show was cancelled in 2004, Swayde set out to prove that it was not the end of his career.

In the fall of 2004, Swayde was cast as John Jordson in the sitcom The Jordsons. He plays brother to Kevin Smiley and son to Anthony Broward on the show. Swayde admitted in 2006 that working on the set of The Jordsons was not all fun and games. A scene for a season two episode called for him to belt out a musical number. Swayde, who is not a singer, had to have a "singing coach" and had to practice for two weeks for the scene. Swayde also said that working on the set was fun most of the time. He enjoyed working with guest stars such as Tito Amauro, acting veteran John Lunia, and Kristin Kallina. He was a main cast member on the show for all seasons, including the last season.

Swayde reprised his role as Daniel Marraux in the 2008 film Microton II. He was reunited with most of his co-stars from the original film, such as Ryan Ulysses Pasthodas and Mitch Karter. Swayde again performed most of his stunts. Johann Von Brumschlon was hired as Swayde's stunt double for the last five stunts during the battle with James Hendry (Pasthodas).

Swayde has made guest appearances on such shows as The Year 7000 and XA-79.

Swayde spends most of his free time swimming, running, and hanging out with friends and family. According to a source, he is currently dating Joan Moularie. He told interviewers that he is not planning to marry until he is 25, and that he hopes to start a family before reaching 30. He does not smoke or drink alcohol, and has no plans to start. Swayde does not like to party too much, and when he does, he does not take it too far. He also does not use profanity. 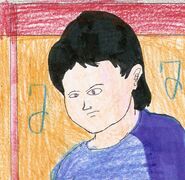 Swayde (left, now with brown hair) with The Jordsons co-star Kevin Smiley at a cast reunion in 2019
Add a photo to this gallery
Retrieved from "https://imagine.fandom.com/wiki/Peter_Swayde?oldid=32484"
Community content is available under CC-BY-SA unless otherwise noted.